From my last posts, I had short positions in gold & euro. The rise in euro & gold to their 1 month high against the dovish FOMC meetings resulted in wiping all my account balance.

Most importantly, I failed to read the markets correctly. I was mistaken & I whileheartedly accept my mistakes. Now that I have this off my chest, I can sleep & think better.

For the time being, I do not have any plans to put up any further investment in forex.

One lesson that hit home hard was that I traded too much in gold. I got greedy. I was bearish about the gold. I will shortly post my losses screenshots. Gold was the reason my total investment blew away. Very very heavy losses. On all three accounts. I wanted to get rich quickly. My greed led me to losses.

Lesson to self: If I ever trade again, Never trade more than 0.05 units of gold.

Now that my investment is wiped, I don’t know what exactly I will do with this domain name.

Repeatedly, I get this thought in my mind that I should invest 5k more and trade only in currencies. But I am afraid to lose any more of my hard earned money.

Let’s see what life throws at me.

Today was a bull day! The day started pretty good with my main account in a positive position overall. Then it started going downhill with dovish FOMC interview, tumbling US Treasury yields and good EZ data. The weakness in USD pushed XAU at 10 days high ($1108) and EUR @ 1.102XX (late July highs). At one time, my day looked really bad with a negative position of $18XX. Nonetheless, I was able to scrape $66 on the main acccount and $50 on the profit account.

I am 2 days behind on my profit payments now.

I’ll just on these positions for now until market takes a turn.

Tomorrow’s a busy EZ data day & it looks like Germany will be posting good numbers on its manufacturing orders for the month of July. I’ll be setting a lower takeprofit price on all open trades that are in a better position so that I can give myself more margin money in case there’s a bigger bull run. 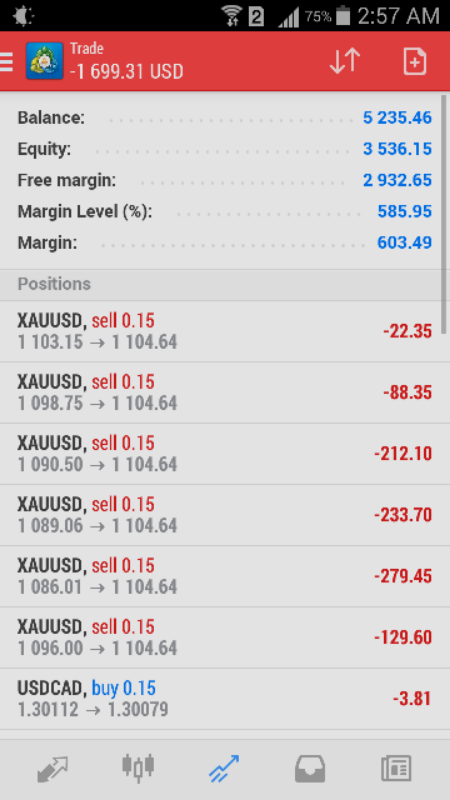 LONDON, Aug 10, 2015 – The dollar stayed close to a nearly four-month high against a basket of currencies on Monday on Fed rate hike expectations while commodity-related currencies weakened after soft weekend data on China’s economy.

The Australian and New Zealand dollars both lost about 1 percent. The dollar index was up 0.3 percent at 97.876, after rising as high as 98.334 on Friday, its strongest since April 23, after data showed U.S. nonfarm payrolls rose 215,000 last month.

That fell short of expectations for a rise of 223,000 jobs but was still viewed as consistent with a strong labour market, and the previous two months were upwardly revised.

“U.S. yields are modestly higher, but dollar/yen needs more widening of the interest rate spread to take it higher. Right now, there isn’t much of a conviction so it will be a slow grind higher for the dollar.”

Speculators increased bullish dollar bets to their highest since early June, according to Reuters calculations and data from the Commodity Futures Trading Commission released on Friday. The value of the dollar’s net long position climbed to $32.77 billion in the week ended Aug. 4, from $29.79 billion the previous week.

Meanwhile, the Australian dollar fell 0.8 percent to trade at $0.7359, hurt by a drop in commodities and oil and by the biggest drop in Chinese exports in four months in July, 8.3 percent compared with a forecast 1 percent fall.

“The Aussie is the most exposed G10 currency to trade with China. Iron ore imports fell 29 percent in the year to July, highlighting that once the second-round effects of lower commodity prices kick into weaker data in Australia, there is likely to be another leg lower in the currency,” Morgan Stanley said in a note to clients.

MANILA, Aug 10, 2015 – Gold ticked higher but stayed within striking distance of a 5-1/2-year low on Monday, after solid U.S. job gains in July suggested the Federal Reserve could raise interest rates as early as next month.

U.S. nonfarm payrolls increased 215,000 in July, less than the 223,000 rise that economists had expected, but still seen in line with a tightening labour market. Payrolls data for May and June was revised to show 14,000 more jobs created than previously reported.

Gold managed to eke out marginal gains on Friday after the jobs data was released, with the smaller-than-forecast number spurring some hopes that the Fed could hike rates later than September.

“While a delay in rate hike expectations may ease some of the near-term pressure on gold, it does not mean prices would rally from current levels given expectations that the Fed will eventually hike rates,” said HSBC analyst James Steel.

A looming U.S. rate rise, the first since 2006, had weighed on non-interest yielding gold, pulling more funds to the dollar. The greenback stayed close to its highest level since April against a basket of currencies.

The metal fell for a seventh week in a row last week, its longest such retreat since 1999, having struggled to pull away from a 5-1/2-year trough of $1,077 reached during a late rout in July.

Top gold consumer China is under growing pressure to further stimulate its economy after disappointing data over the weekend showed another heavy fall in factory-gate prices and a surprise slump in exports.

China’s foreign exchange reserves, the world’s largest, fell by $42.5 billion in July to $3.65 trillion, the sharpest monthly drop since March amid signs of capital outflows. The value of China’s gold reserves dropped to $59.24 billion from $62.4 billion.

FOMC Member Lockhart & Stanley Fischer are due to speak at the Atlanta Press Club Newsmaker Luncheon today at 17:25 GMT. Any hawkish views will strengthen greenback further.

My positions are getting better as the day starts. 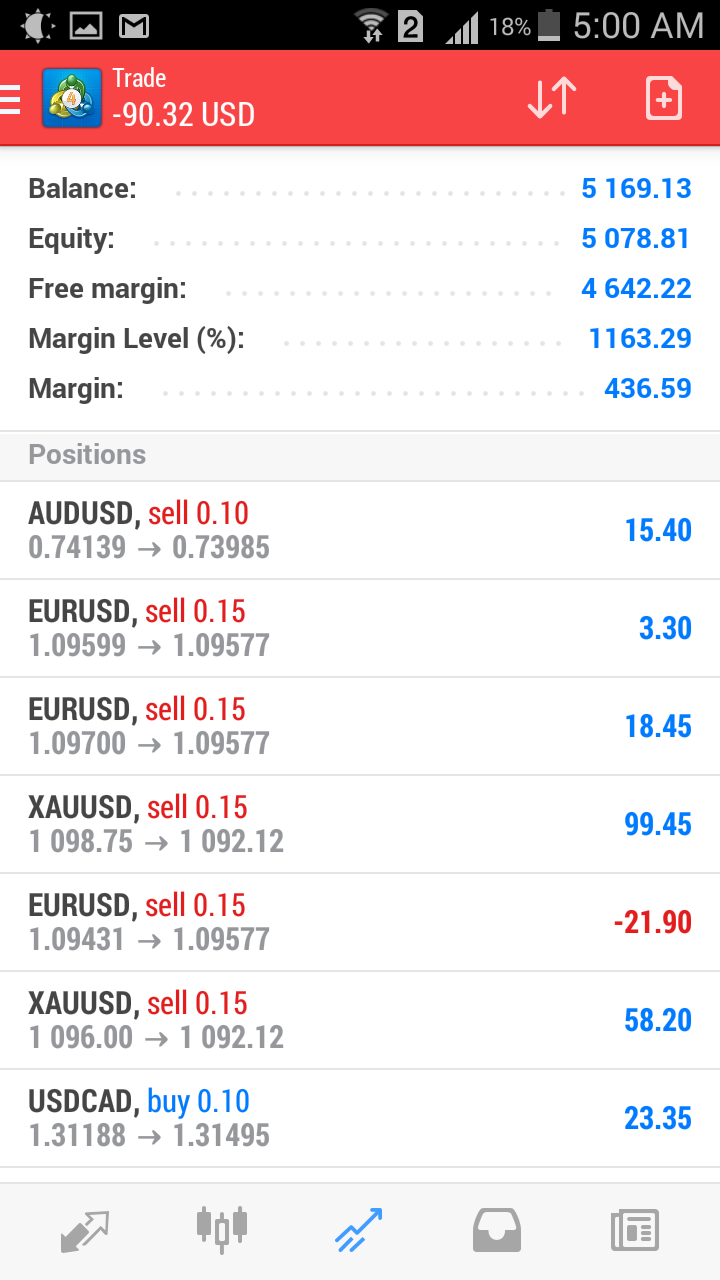 I have total open positions of 0.75 lot of XAU short with an average price of $1092.50 (including swap accrued over the weekend). I have set a takeprofit at $1080.50 and expect that market will see these levels somewhere on Wednesday. If there are any fundamental or technical changes in XAU in between, I’ll close the trades that are in profit to minimize my exposure.

My open position in EURUSD is 0.45 lot short with an average price of 1.09585 (including swap accrued over the weekend + commission per trade). My target takeprofit is 1.08999.

Current open position in AUDUSD is 0.25 lot short at an average cost of 0.73800 (including swap accrued over the weekend + commission per trade).

If USD continues it’s bull run (which fundamentals support specially after the NFP data that came out last friday), then I am in excellent position to close $1k in profits by the end of the week. If not, then I am another strategy at hand.

Sometimes, the trades that I am quite confident about takes a long time to mature. Let’s wait and watch!

Nothing excited expected from Asian markets this morning, so I am going to take some rest for now.

It’s going to be a quiet US data week ahead with Q2 labor costs along with productivity data out on Tuesday 11th August. On Thursday 13 August, July retail sales data will be out (+0.5% m/m forecast v/s -0.3% previous).

This week, a lot of data coming out of EZ. I am particularly eyeing Q2 flash GDP (+1.3% y/y forecast v/s +1.0% previous) due on Friday 14 August. So far from my analysis, this week is going to set the trend for EURUSD.

In UK, employment data is due on Wednesday 12 August which I am expecting will strengthen GBP against the USD.

In Japan, machinery orders data come out on Wednesday 12 August which is of particular interest. Analysts forecast it’s going to be negative. Slight chances that it will weaken USDJPY up to 125.070.

In Australia, not much of interest except for Q2 wage prices out on Wednesday 12th August. 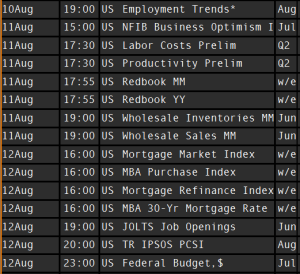 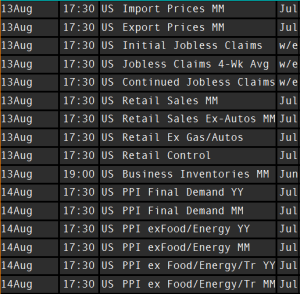 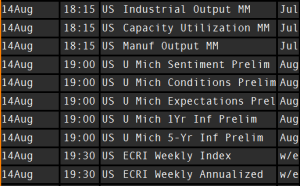 Since I trade very small lots, I’d rather prefer to sit on a position for a few days rather than closing it at a loss. This has worked for me most of the time. And this is why you have not seen any trades closed in red since I started this blog.

The only time I close positions at a loss is when I am truly sure I am positioned at the wrong side of the market. Even then, I try to close them during short bull-run of a major news break to ensure I am able to recover at least the cost of the trade. Pepperstone charges $7.88 per 1 lot of EURUSD.

How I test my hypothesis/analysis?

I have a demo account that I trade on when I am not so sure about a certain pair or it’s direction. The demo account was started at $5k and currently stands at $14k. I am not going to post any screenshots for demo account on this website because that’s going to confuse everyone. If you want to see a screenshot of the demo account, drop me an email.

Time to get back to following the Asian market!